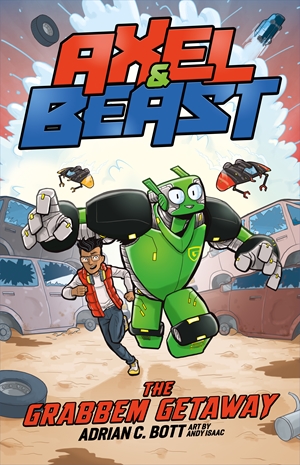 One day, Axel is playing video games when something HUGE breaks into his garage. It’s a robot. His name is BEAST. And he's on the run from the nasty Grabbem Industries, who want BEAST back – right now!

Axel has no idea that he and BEAST will soon be best friends and go on the wildest adventures you could imagine. BEAST is no ordinary robot, and Axel isn't your usual gamer. But are they awesome enough together to escape from BEAST's evil creators?

This one is one that all gamers will love!

Axel loves video games, and if it wasn't for his online arch rival, BAGGER_63, he would win far more than he does. But things are tough financially for Axel and his Mum, ever since his Dad disappeared the year before, so he has no way of buying the best Tankinators that would help him win. Unlike BAGGER_63!

So when Axel finds the giant robot BEAST at his house, his ordinary day takes a dramatic turn and the two of them find themselves on one dangerous adventure. Can Axel and Beast do the impossible and beat the all powerful Grabbem Industries?

This is more than just an adventure story though. It is about the importance of having a go and standing up to those that only think of themselves and, when Axel realises who the rich boy trying to get his robot back really is, it might just become a bit more personal...

This is the first in this new, exciting series that is pitched perfectly for junior-middle primary video game fans.