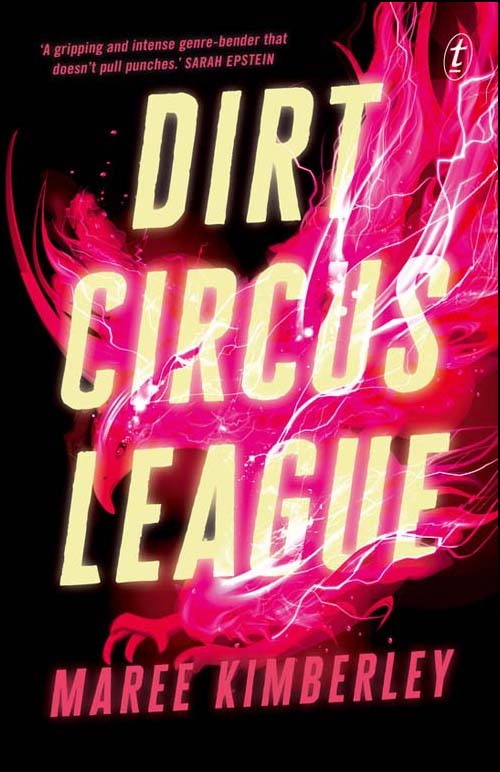 Take a trip into a dystopian Far North Queensland with this wildly exciting YA novel by Brisbane author Maree Kimberley.

I stumbled towards the Meat House, my body shaking with the violence that raged within me, as the realisation of the mistake I had made in coming here rose to the surface of my mind. This was the last place I should be. That thought was crossed by another, even more terrifying.

This is exactly where I belong.

Asa's running from a troubled past. To a remote outback town, a disappointing father and a fresh start that's already souring.

But then the notorious Dirt Circus League arrives. A troupe of outcast teens performing spectacular fight sequences and challenging any who dares to take part.

They're ruthless. Menacing. Thrilling. And led by the magnetic Quarter. He's dark, powerful and intensely attractive - and he faces a threat only Asa can see.

Will Asa be drawn into the league's mysterious community?

And, as she discovers the violent secrets at its heart, will she delve into her own untapped abilities to save herself - and heal those caught in its evil web?

Dirt Circus League is a compelling and fast-paced novel about the powerful allure of danger and the battles we face with our demons in a world beyond our control.

Asa has endured a tough upbringing. Finally sick of the abuse inflicted by her Mum’s many boyfriends, she heads north to her Dad in a town called Dirt Creek in far North Queensland.

With a martial arts background, Asa is intrigued when the Dirt Circus League come to town to fight any takers, and ultimately fleece the locals. Strangely attracted to their leader, Quarter, Asa decides to join their group.

But little does she know she is not joining a fight club, but a cult, who literally sacrifice themselves for Mother Earth. Asa must act fast to save herself and those caught up in the cult. But can she succeed?

With themes of abuse, violence and human sacrifice, cults, and living with the land, this is not a story for the faint-hearted. It is, however, a compelling Australian thriller that many will love, although given the themes it will best suit those aged 15+.