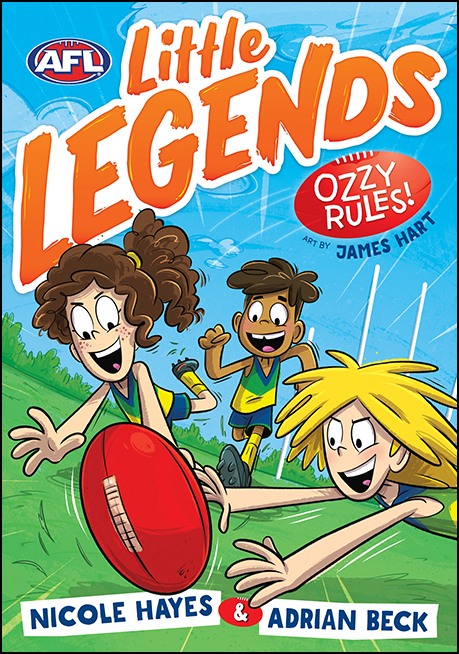 Little Legends follows Oz, Ellie and Sanjay Little, star players for the Fresca Bay Falcons, on a series of hilarious and action-packed adventures that celebrate the great game of Australian Rules.

Twins Oz and Ellie are footy fanatics. They can’t wait to introduce Aussie Rules to their cousin Sanjay, who is moving back to Australia from overseas. 10-year-old Oz is the key playmaker for the Falcons (as he’ll tell anyone who’ll listen!). Ellie is a talented full-forward and the leading goal scorer for the whole league. But when their cousin Sanjay tries footy for the first time, he’s a natural. Suddenly, Sanjay is the Falcons’ hot new recruit and Oz and Ellie have some competition!

AFL fans are going to absolutely love this new series!

Twins Oz and Ellie live for football. Be it at school or on the weekend, that’s all they want to do - and they are both very good at it.
They are so excited that their cousins are moving back from overseas and can’t wait for Sanjay, who is their age, to be able to play with them.

Sanjay seems to be a natural at this game, but then Oz starts to feel uneasy and even annoyed. He is supposed to be the star of the team! Ellie can’t believe that her brother is acting this way and feels terrible for Sanjay.
Will Oz remember that footy is a team sport in time for the opening game of the season?
A fantastic story about friendships, family, inclusion and overall about the joy of playing sport.
A perfect read for all middle primary aged students.