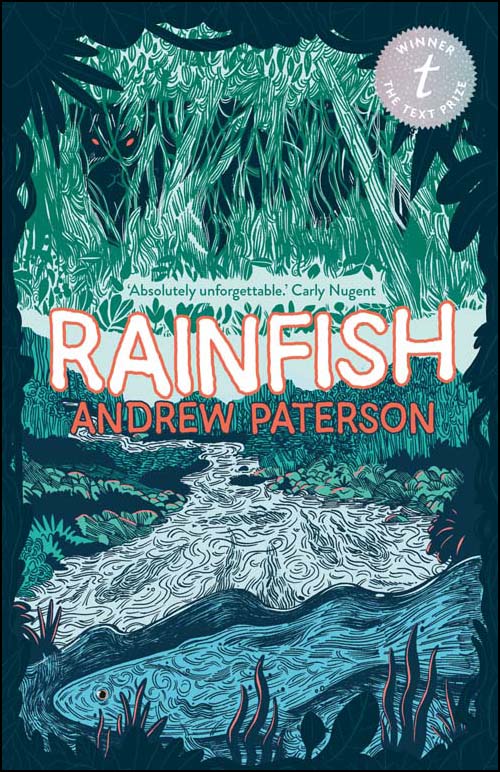 Winner of the 2020 Text Prize. A humorous and poignant middle-grade story about a young boy grappling with guilt after stealing from the local church.

'You don't kill them rainfish cause they'll bring trouble. Rainstorms and floods and bad things.'

Aaron lives with his mum and older brother in a small town on the edge of a rainforest in tropical Far North Queensland. He's sick of being the little bother, left out of all the interesting stuff the older kids get up to.

So when he meets Damon he's keen to impress him. It's all going well, until Damon suggests they break into the church. Aaron's nervous and uncomfortable. But he can't back out now - he's only just beginning to be accepted.

When the theft is reported in the local newspaper and the police knock on the door, Aaron finds himself hiding the truth in a tangle of lies. And before long his deep sense of guilt and fear of being found out overwhelm him.

And then, when he discovers that the mudcod in the old bath in the backyard - the fish he'd caught in the river in the rainforest - are the rainfish of local legend, he becomes convinced that he is responsible for the terrible rainstorms and floods that devastate the town.

Rainfish is a delightful middle-grade novel exploring childhood innocence - a warm and humorous portrayal of a young boy trying to undo an impulsive mistake.

This is a terrific Australian adventure, set in a small far North Queensland town. Our main character, Aaron, wants to live life to the fullest but when he teams up with Damon, a rebellious new kid in town, things quickly go wrong.

They break into the church and steal the Priest’s prized rosary beads, and Aaron is instantly remorseful. His fear of being caught is exacerbated by his older brother Connor deciding to make it his mission to uncover the perpetrators.

When Peter, his Mum’s new boyfriend, takes the boys fishing they catch lots of mudfish. These are known as rainfish in the local legends - as they believe catching the fish brings rain. But when a torrential flood follows their fishing outing, the likes of which the town has never seen before, Aaron is convinced it was his fault.

With Aaron’s guilt increasing, can he find a way to try and make things right?

This was such a great story and an easy read, with themes of guilt, remorse, family dynamics and rural communities, that will appeal to all lower to middle secondary readers.