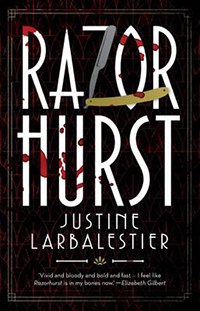 Kelpie knows the dangers of the Sydney streets. Ghosts have kept her alive, steering her to food and safety, but they are also her torment.

Dymphna is Gloriana Nelson's 'best girl'. She knows the highs and lows of life, but she doesn't know what this day has in store for her.

When Dymphna and Kelpie meet over the corpse of Jimmy Palmer, Dymphna's latest boyfriend, she pronounces herself Kelpie's new protector. But Dymphna's life is in danger too and she needs an ally. And while Jimmy's ghost wants to help, the dead cannot protect the living.

Gloriana Nelson's kingdom is crumbling and Mr Davidson is determined to have all of Razorhurst - including Dymphna. As loyalties shift and betrayal threatens at every turn, Dymphna and Kelpie are determined to survive what is becoming a day with a high body count.

'Vivid and bloody and bold and fast; I feel like Razorhurst is in my bones now.' Elizabeth Gilbert

Award-winning author Justine Larbalestier has produced a marvellous depiction of Sydney’s underbelly during the 1930 depression years.

Capturing a world where two mob bosses ran the streets and where prostitution, alcohol abuse and death were regular visitors.

Brilliantly written, told in alternating viewpoints – partly the story of 16 year old street urchin Kelpie, who communicates with and is led by ghosts, and partly the story of Dymphna, also 16, an immaculately dressed ‘best girl’ of Gloriana Nelson, one of the mob bosses.

The story is set the day after the death of Dymphna’s latest boyfriend, strongman Jimmy Palmers, over whose body these girls meet.

It is fast paced and intricately woven and will give your older readers 15+ a taste of an exciting and somewhat awful time in Australia’s history.