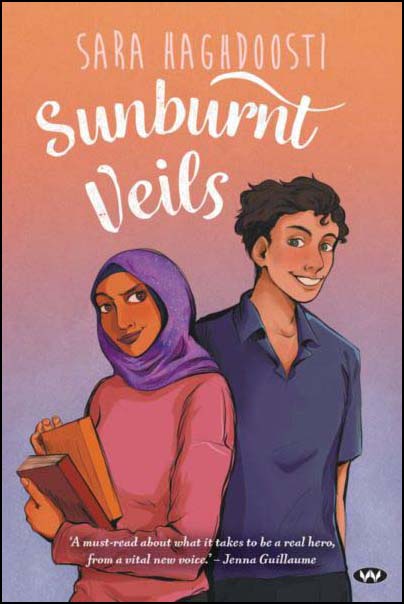 Sunburnt Veils is a smart, funny, character-based exploration of Islamophobia through a heroine who's the kind of girl who reads at parties, but pushes herself to take a visible stand after a fellow student calls in a bomb threat on her first day of university, after she leaves a bag in a lecture theatre to take a phone call.

Girl meets boy, ghosts his text messages, then convinces him to help her run for the student union. Just your typical love story with a hijabi twist.

Tara wears hijab even though her parents hate it, and in a swipe right world she's looking for the 'will go to the ends of the earth for you' type of love. Or, she would be, if she hadn't sworn off boys to focus on getting into med. Besides, what's wrong with just crushing on the assassins, mages and thieves in the fantasy books she reads?

When a bomb threat on her first day of university throws her together with totally annoying party king and oh-so-entitled politician's son Alex, things get complicated. Tara needs to decide if she's happy reading about heroes, or if she's ready to step up and be one herself.

Sunburnt Veils is a wonderful story of diversity and acceptance.

Our hero is the book-loving, super-intelligent Tara, who chooses to wear hijab. She is a Sydney University first year med student, but when she momentarily leaves her backpack in a lecture she finds that a bomb threat has been called in.

Following this incident she decides to run for the Student Union, but she is later attacked by a stupid, super-wealthy prankster.

Tara and her best friend Mitra are the real core of the story, but it explores so many wonderful characters and relationships. The highlight is Tara’s growing, but sometimes difficult, love story with Alex, who just happens to be the son of the NSW Premier.

With a touch of humour, Sunburnt Veils effortlessly tackles themes of discrimination, Islamophobia, and explores Tara’s determination to try to make the world a truly more accepting and better place.

It contains the occasional swearing, but always in context, so it will be best suited to readers 15 and older.