The Adventures of Alfie Onion 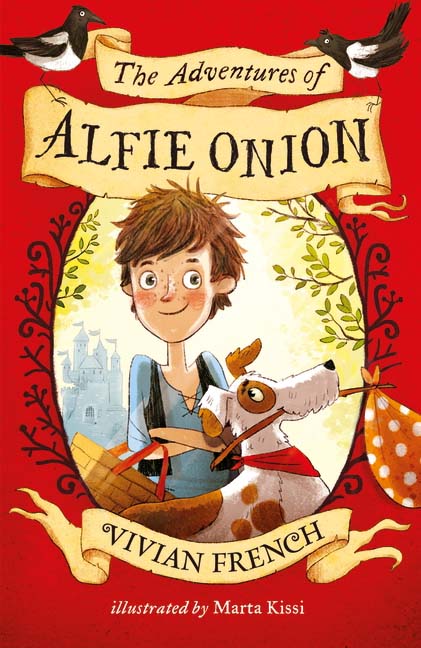 A stand-alone comic adventure for younger readers by sublime storyteller Vivian French, with pictures by a talented new illustrator and animator, Marta Kissi.

Alfie Onion has just set off on a great adventure... but only to carry his brother's luggage. It's his elder brother, Magnifico Onion, who's destined to win their family a Happily Ever After. But when it turns out Magnifico isn't half the hero he's cracked up to be, it falls to Alfie to save the day - with a little help from his loyal dog, a talking horse and a couple of meddling magpies.

Aggie Lumpett had always loved fairy tales and truly believed in them, especially the one about marrying a prince and living happily ever after. She soon realises how unlikely this is so she changes her fairy tale dream to the one about the Seventh Son of a Seventh Son being a hero, and marries Garf Onion, who is a seventh son.

Many years later when their own seventh son, Magnifico, arrives she knows he is destined to be a hero and marry a princess so they can all live in glorious luxury. So when she has an eighth son, Alfie, she is far too busy looking after her hero Magnifico to worry about him.

Poor Alfie lives in the barn and is looked after by his oldest brother, Yurt.

When the time comes for the spoilt and selfish Magnifico to head out on his adventure to become a hero, Alfie has to go with him to carry his supplies. But Alfie does it all with style, grace and humility. The two brothers could not be more different, and you can’t help but hope Alfie succeeds in the end!

Their ensuing magical adventure is full of ogres, trolls, talking animals and scheming magpies. But will there be a Princess and riches at the end?