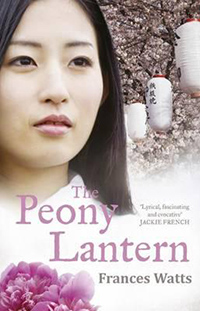 When Kasumi leaves her remote village for the teeming city of Edo, her life is transformed. As a lady-in-waiting in a samurai mansion she discovers a rare talent for art and falls in love with a young samurai.

How could she ever return to the life of a simple mountain girl? But Kasumi must set aside her own concerns. Her country is on the brink of change and Edo is simmering with tension.And her mistress has a dangerous secret—a secret that Kasumi is gradually drawn into...

Set against the vivid backdrop of nineteenth-century Japan, The Peony Lantern is a powerful story of art, love and friendship, and finding your own path.

Set in Japan in the mid 19th century, where girls were expected to be obedient, but Kasumi likes to speak her mind. She knows this is wrong, but this doesn’t always stop her.

When she witnesses a conversation between Lord Shimizu, a samurai, and an out-of-towner, she is asked to accompany him to become the lady-in-waiting to his new wife, Misaki.

We don’t understand the treachery of this until the end of the story.

Kasumi and Misaki have a slowly warming friendship, but this falters and Kasumi can’t understand why. Is it because of her attraction to Lord Shimizu’s nephew Isamu? Or does Misaki herself have a secret love of him?

The story is filled with beautiful depictions of Japan and its culture during this strict period when it was still cut off from the rest of the world.

I loved Kasumi, the headstrong burgeoning artist who is taken under the wing of a great painter. She is mostly obedient, but she has this underlying inquisitiveness and desire to achieve much more than her early village life could ever provide.

This is an entertaining read that will be best enjoyed by girls 12 and up.