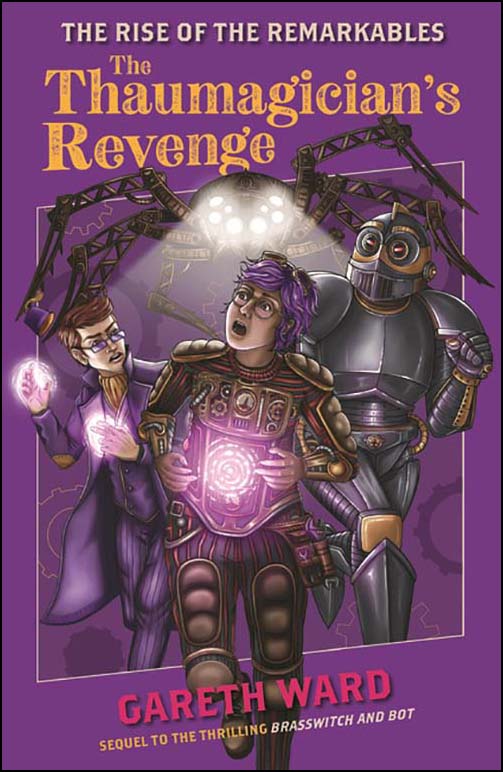 The next crackingly paced, steampunk thrill ride from award-winning master of the genre, Gareth Ward.

Following on from the dramatic events of the first book in "The Rise of the Remarkables" duology, Brasswitch and Bot, we find Wrench and Bot on the hunt for Plum with the aid of Thirteen. Plum is more dangerous than ever and appears to be recruiting more aberrations – determined to re-open the rupture. Meanwhile, the events of the Minster Schism have drained Wrench of her magic and she begins lessons with Master Tranter in attempt to re-kindle her powers.

It is here that she meets Vexanna, Thirteen’s new apprentice thaumagician. They will all have their roles to play, as Wrench works to discover the truth about her past – and make it to her future alive.

Set in the world of steampunk York in England, our hero Wrench (Wren) and her trusty mechanoid Bot continue on their trail of destruction, trying to stop the creatures entering our world through a rupture.

Wrench is a Brasswitch, which allows her to control all things mechanical, but her magic has lessened after her victory at the Minster Schism. But as her friendship with Vexanna, the new thaumagician grows, so does her power.

Watch out Captain Flemington and the other Regulators, who want to thwart Wren and Bot’s ultimate aim of keeping the world safe from the constant threat of the many and varied Remarkables.

We are drawn in a little closer to Wren, her character and her thoughts in this story. Could Wren maybe even start to empathise with the Remarkables…?

Most of you will be familiar with Part One which was included in our August 2020 Secondary Standing Order package. Although this is Part Two of this story, it can be read alone and you get hooked into the atmosphere and pace of the story very easily.

Set in a world full of steampunk technology, magic and intriguing characters with one action scene after another, this book will be best suited to readers aged 11 - 14.