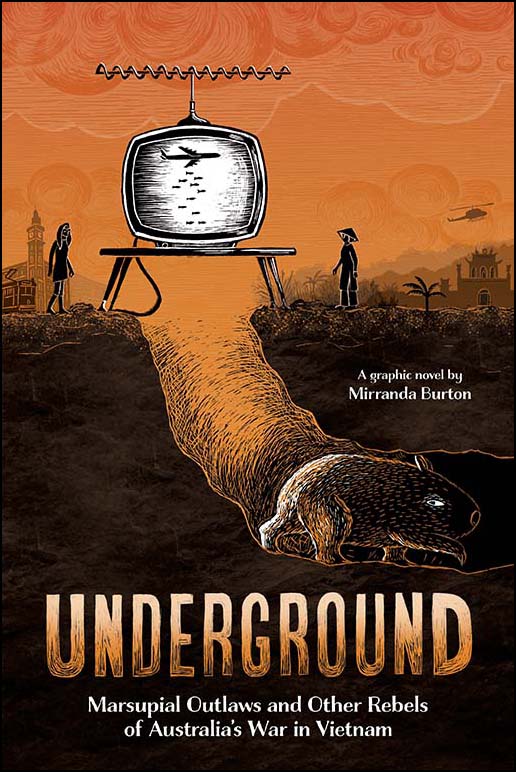 Why would a wombat be registered for war?

It's 1965, and an old Tattersalls barrel starts rolling marbles to randomly conscript young Australian men to fight in the war in Vietnam. Melbourne housewife Jean McLean is outraged, as are her artist friends Clif and Marlene Pugh, who live in the country with their wombat, Hooper.

Determined to wreck the system, Jean forms the Save Our Sons movement's Victorian branch, and she and her supporters take to the streets to protest. Meanwhile, in the small country town of Katunga, Bill Cantwell joins the Australian Army, and in Saigon, young Mai Ho is writing letters to South Vietnamese soldiers from her school desk. And when Hooper's call-up papers arrive, he mysteriously goes underground…

As these stories intersect in unexpected ways and destinies entwine, a new world gradually emerges - a world in which bridges of understanding make more sense than war. This stunning graphic novel, full of empathy, courage and resistance, is based on true events.

Conscription during the Vietnam War is the setting for Underground, which follows the lives and input of some truly remarkable people, including:

• Jean McLean, who started the Save our Sons movement and worked tirelessly to get conscription abolished. She went on to spend 15 years in the Victorian Parliament.

• Jean’s friends, Clif and Marlene Pugh, whose wombat was conscripted after they spuriously enrolled him.

• Bill Cantwell who was a soldier, and later a barrister, and who shows us that once you have experienced war it never leaves you.

• Vietnamese refugee Mai Ho, who became the newly formed City of Maribyrnong’s first Mayor in 1997, and a much needed voice for her community.

We see how their lives intertwine in their pursuit of a better world, free from racism and from conscription to war.

Presented in easy to read graphic novel format, this is an ideal book for lower and middle secondary readers. Based on historical events, it will particularly appeal to reluctant readers who enjoy true stories.