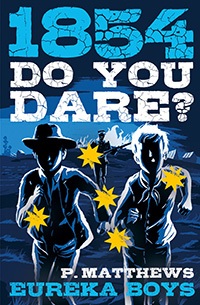 Stand up to a bully?

Risk your life for a friend?

It's an adventure in history.

Henry lives with his father and sister on the Victorian goldfields. Still mourning the loss of his mother and baby brother, Henry helps his father to mine their claim and hopes that one day they will strike it rich.

But they can't afford a mining license and without a license they are at the mercy of the corrupt police.

When Henry meets a new friend, Frank, he enters a world of politics, riots and rebellion that will lead him to Eureka Stockade, one of the defining moments in Australian history.

It’s 1854 and life on the goldfields of Ballarat is harsh and unjust.

Henry is a young boy, who after the death of his mother , finds himself having to grow up quickly. Together with his father and young sister, they are trying to find their riches in gold.

But the ever present threat of the ‘Traps’ mean that they are constantly under threat.

Henry strikes up a friendship with an Irish boy named Frank. Henry’s father is not happy about this, as the English and the Irish do not get on and he thinks he is a bad influence on him.

Although Henry’s father wants change too, he doesn’t want to be a part of the rebellion, but Henry and Frank find themselves caught up in the middle of this fight against the government - A fight for a fair go for the miners.

It is a story of the realities of life in the 1800’s, friendship, fighting for justice and following in what you think is right.

Boys 10 and up will thoroughly enjoy this book.