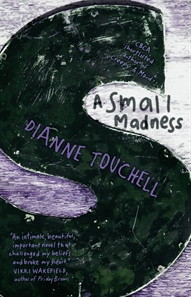 Rose didn't tell anyone about it. She wondered if it showed.

She looked at herself in the mirror and turned this way and then that way. She stood as close to the mirror as she could, leaning over the bathroom basin, looking into her own eyes until they disappeared behind the fog of her breath. Looking for something. Some evidence that she was different now.

Something had shifted inside her, a gear being ratcheted over a clunky cog, gaining torque, starting her up. But it didn't show. How could all of these feelings not show? She was a woman now but it didn't show and she couldn't tell anyone.

This is a powerful novel that deals with deep and at times disturbing themes. It tackles the effects an unwanted pregnancy can have on a teenager and the consequences that subsequent bad decisions can lead to.

It is gripping and totally a absorbing read, but in the end, you wonder if Rose’s decision of denial justifies our need to believe her to be a monster.

Dianne Touchell suggests guilt and evil are very different things and that underscores what this novel really teaches us.

A story that will have people talking. It is at times shocking and will only be appreciated by those 15 and older.