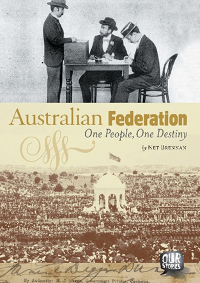 One people, one destiny.

Before 1901 the nation of Australia did not exist. Queensland, New South Wales, Victoria, Tasmania, South Australia and Western Australia were six separate colonies under British rule.

But among the people of the colonies, the idea of unity was emerging: "a whole continent for a nation, and a nation for a continent".

Here is the story of how ordinary citizens became the first in the world to write and vote for their own Constitution, and how they came together to form the nation of Australia.

Curriculum topic for upper primary in every state and in the new national curriculum.

This title was included in our Primary Non-Fiction Standing Order selection for April 2014.