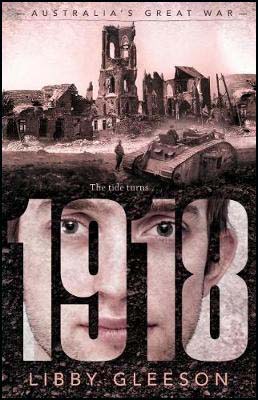 The planes kept flying low above them. They were dropping bombs and the noise drowned out all other sounds. After an hour, the signal rang out and they surged forward through the smoke. Thousands of men screaming and yelling, their line was kilometres wide. Behind them came Monash's tanks, those huge, new mobile machines.

They smothered the land they ran over; flattening the crops and then any wire left standing. With Russia out of the war, the Germans have sent all the troops to the Western Front. Almost defeated, a small group of Australians fight to hold the enemy back at Villers Bretonneux.

Weary after years of fighting and deadlock, Ned and his mates know that the war will be lost if they can't turn the tide. More and more, Ned's thoughts turn to home, not knowing if he will ever see his family, or his brother, again.

This is the final instalment of the World War I centennial anniversary series called Australia’s Great War, and what a marvellous group of books they are. In 1918, we follow the steps of Ned, who is 17 turning 18, and his friends who joined the Coo-ees march from Gilgandra in NSW to the French battlefields around Villers Bretonneux and Amiens. Letters going back and forth to Ned’s Mum and sister give us an insight into his feelings as the war was drawing to a close.

Acts of bravery above and beyond the call of duty abound, as we are confronted by the squalid conditions and horrors of war. I was really taken with this story, as my wife Michelle and I spent a day touring the area in our April visit to Europe. We were particularly taken by the Victoria school in Villers Bretonneux and the nearby Australian National cemetery and memorial.

This is a wonderful book, in a equally good series, that is easy to read and will give readers a better understanding of this important part of Australia’s history.

It is ideally suited to younger readers aged 11-15.