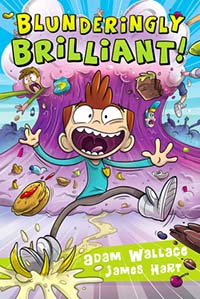 Jackson Payne has blundered his way onto the front page of the newspaper. He’s a hero! A Star! He’s brilliant!

The problem is, Jackson’s believing the hype. He’s getting a big head. A HUGE head! Like, he thinks he’s the biggest legend in the entire world!

This is the second book about Jackson Payne, the accident prone boy who we met in Accidentally Awesome earlier in the year.

Jackson finds himself on the front page of the newspaper - as a hero! But things didn't quite happen the way they were reported, and anyone who knows what Jackson is really like, will probably realise that already.

Jackson gets a big head, and thinks that as he is now a hero he is better than everyone else.

He soon learns some valuable lessons about treating people right, and maybe he will end up being a hero after all!