Catch the Zolt - The Debt Instalment One 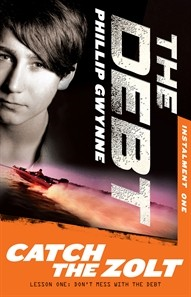 It's a beautiful day in paradise. The sun is shining. The birds are chirping. And Dom Silvagni, eldest brother, indifferent student and elite middle distance runner, is turning 15.

But instead of cake and candles, Dom receives the most unlikely gift. An ancient family debt from an organisation so secretive and powerful, they are only known as The Debt.

And The Debt have made it clear - Dom must perform six Herculian tasks or lose a pound of flesh.

Dom Silvagni lives an ideal life with his mega rich family and his talent for middle distance running.

But then his fifteenth birthday arrives and he learns of his families debt to the 'Ndrangheta' (the most powerful and active wing of the Mafia).

He is branded by his father and grandfather and given his first of six tasks to complete to repay his debt or lose a pound of flesh. Is this why his grandfather has a foot missing? Dom thought that was from a shark attack!

His first task is to catch the Zolt. The Zolt is a seventeen-year-old local modern day Robin Hood. Catching him cannot be easy and will surely not make Dom popular!

What follows is an intriguing, action-packed, adventure that secondary boys will find compelling.

This book was included in our February 2013 Secondary Standing Order subscription.