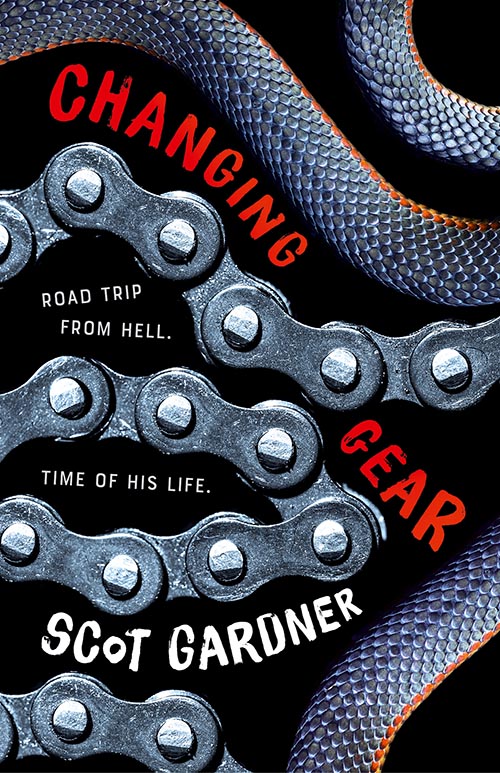 The vivid story of a teenage boy and the road trip that clears his head and his heart.

Merrick Hilton's done a runner. His folks think he's studying, but the real world has been calling for years and he can't ignore it any longer. A postie bike, a bedroll and a big sky - that's all he needs. But there's no telling how he'll handle roadkill, stolen oranges and unexpected romance, let alone the rough stuff. And in the real world nothing goes entirely as planned. Thankfully Victor - the old bloke Merrick meets on the road - knows a thing or two about broken bike chains. And broken hearts.

Scot just gets adolescent boys and what they want to read about. He understands their emotions and takes us on a journey of discovery of the person inside.

In Changing Gear, Merrick is about to have his two weeks of study time before his Year 12 exams. However, since his grandfather’s recent death, Merrick misses his steadying influence and with a split family he finds it easy to have them believe he is studying hard at the other parent’s house, whilst in reality he has hopped on his old postie bike and hit the road.

The journey is the real story, as he meets an old vagabond called Victor (and Dog) who shares many life experiences and words of wisdom. He meets the gypsy-like Felicity, who briefly shares his journey, and he gets beaten up by idiots who believe he and Victor are paedophiles.

At the end, Merrick goes home to face those exams, and with a fresh outlook on life, achieves a 97.5 Atar score. But where will this take him is still unknown...

I have known Scot Gardner since he wrote his first book, and as I was reading Changing Gear I wondered how much he had drawn on his own personal experience given he was his schools’ dux and went first to work with the local councils parks and gardens, followed by many other jobs. When he spoke at our recent Author Event, I wasn’t surprised to hear him confirm that he had drawn on his personal experience in crafting Changing Gear, and this really shines through in the gritty realness of the story.

He is an inspiring and intriguing man who writes stories that are the same. I love Scot’s work and Changing Gear is a perfect example of what he does best.

This is a fantastic read for all, but will be best loved by boys 14 and older.