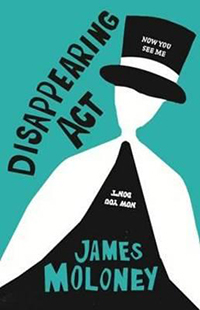 Matt Cooper is twelve, and spends quite a bit of his time honing his magic skills and tricks.

He doesn't realise that his great-grandfather, Mattheus Coperneau, was a professional magician whose career came to a disastrous end when a trick he performed backfired spectacularly.

What neither Matt nor Mattheus realise is that there's an even older story behind the failure of Mattheus's 'disappearing trick' and a tragic romance is at the bottom of it all.

In 1889, Joachim Tannislaus is a young scientist with a stellar career in front of him and half the girls in the small principality of Montilagus pursuing him. But Joachim loves Princess Agneta, who is also studying at the university. When he and Agneta are caught in an embrace, he is thrown into prison to perish, but Agneta gives him a dose of the potion they have been working on in secret, little knowing that the elixir has given him the possibility of eternal life.

When Matt and his family return to Montilagus to clear his great-grandfather's name, Matt discovers that there's more to magic than meets the eye.

When budding magician Matt Cooper visits the city with his Mum he sees an old man drawing in chalk on the footpath. The man asks Matt to finish the writing, which is in a foreign language. Matt amazingly does as he is asked, although he does not know how he managed it.

The old man has been waiting 30 years for this to happen and becomes very excited, but Matt’s Mum drags him away.

When Matt returns to visit the old man on his own he discovers that he is his great grandfather, Mattheus Coperneau, a famous magician who was exiled from the principality of Montilagus in Europe for the magical disappearance of the Royal Sceptre. Unfortunately, during Matt’s visit, his great grandfather dies.

So begins an amazing journey of discovery featuring magicians, princesses and an elixir of eternal life. This is a fantastic story, woven together brilliantly by James Moloney.

I highly recommend this novel to all middle (10-14) year old readers. I guarantee you will love it!