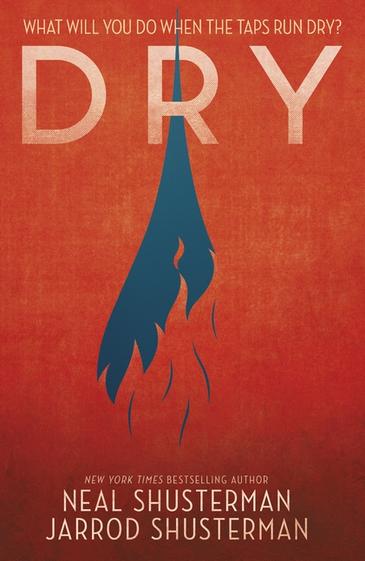 When the California drought escalates to catastrophic proportions, a group of teens are forced to make life and death decisions in this harrowing story of survival from New York Times bestselling author Neal Shusterman, and Jarrod Shusterman.

The drought – or the Tap-Out, as everyone calls it – has been going on for a while now. Everyone’s lives have become an endless list of don’ts: don’t water the lawn, don’t take long showers, don't panic. Until the taps run dry. Suddenly, Alyssa’s quiet suburban street spirals into a warzone of     desperation; neighbours and families turned against each other on the hunt for water. And when her parents don’t return, she and her younger brother must team up with an unlikely group in search of water. Each of them will need to make impossible choices to survive.

Set in California, but very relevant to many in Australia, Dry is an incredible novel. Just imagine turning on the tap and nothing, nil, zilch! This book explains quite vividly what happens next, and it is not pretty… it starts with a run on the supermarket and then, within three days, it descends into anarchy.

Our characters are a mixed bunch, thrown together by a need  -  thirst!! Alyssa, through whose eyes we see most of the story, is an independent and driven sixteen year old. When her parents go out and don’t return, Alyssa takes her younger brother Garrett and her dorky neighbour, turned doomsday prepper, Kelton, to find water themselves.

They join with the super tough street kid Jacqui, and the Hollywood hills smoosher Henry, and together they face a realistic and somewhat terrifying look at the decay of the moral and ethical values of a community.

I can’t give away the story, but I read it in a few hours, as it had me engrossed in the roller coaster ride with great and very different characters, whose differences added immensely to the story.

With themes of survival (and at what cost), community, human nature, and of course drought, this is a tremendous and action packed read, suitable for all teenagers.