Escape to the Moon Islands 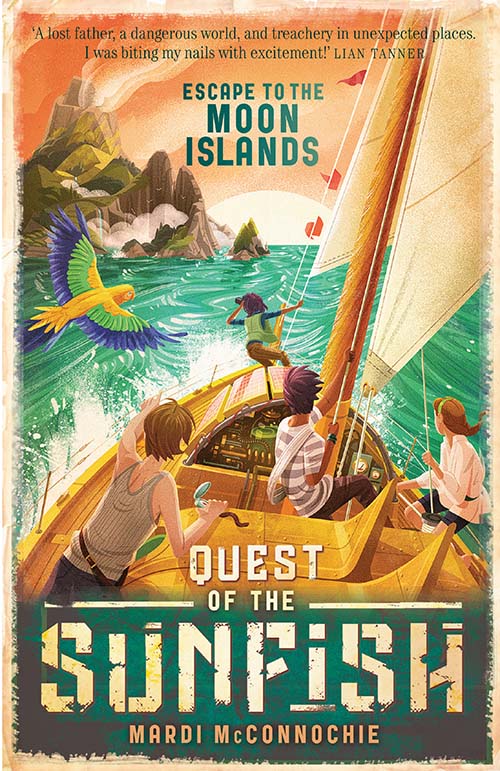 When Will and Annalie's father disappears, they set out on a perilous sea voyage to find him. The motley crew of runaways put their faith in each other, and in a small sailing boat called the Sunfish. In a world transformed by a catastrophic Flood, they embark on an adventure that will test their ingenuity - and their friendship - to the limits…

The crew face off against storms and pirates, but the biggest threat of all comes from the Admiralty, the all-powerful navy that rules the oceans of the world. The Admiralty are supposed to be the good guys, but the deeper the Sunfish voyages into the Moon Islands, the more they realise that nothing is what it seems.

This is a fantastic adventure set on the high seas.

When twelve year old twins Will and Annalie’s father disappears suddenly, they join with Annalie’s friend Essie and their talking parrot Graham to try to locate him.

Along the way they first have to break their sailboat, the Sunfish, out of the Admiralty’s impound, who then pursue them relentlessly. Despite encounters with high seas, cannibals and pirates, their cunning and ingenuity beyond their years allows their quest to continue.
Set in a time forty years after floods ruined much of the world and the Admiralty are the pseudo government who may not be particularly good, this adventure will appeal to those as young as nine.

Being quite a lengthy read, it will engross good readers for days, and with further adventures to follow it should also give them something to look forward to next year.