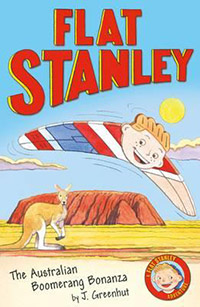 G'day, Stanley! Flat Stanley and his brother Arthur have just won a trip to Australia! They fly down under on a private jet and go diving in the Great Barrier Reef.

But when Arthur launches him into the air for a game of boomerang, Stanley is accidentally sent spinning off into the heart of the Australian outback!

Flat Stanley and his brother Arthur find themselves in Australia after winning a competition from an Australian cereal company, Kanga Roos.

They head off, without their parents, on a wonderful adventure that sees them taking in many of the tourist attractions that Australia has to offer, while also learning some of the Aussie ‘rhyming slang’ that their mother told them about.

The boys both feel responsible for looking after each other. Arthur for looking after Stanley, given the complications that he has because he is flat, and Stanley for Arthur because Stanley is older and more experienced in travel. So when Flat Stanley’s biggest issue, the wind, sees him being whisked off to the outback, both boys feel guilty about leaving each other.

Can they find each other in time and what other surprise will arise from their adventure?

A fun, adventurous read about family connections, that junior to middle primary students are sure to enjoy.