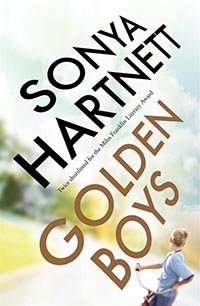 Colt Jenson and his younger brother Bastian live in a world of shiny, new things – skateboards, slot cars, train sets and even the latest BMX.

Their affluent father, Rex, has made sure that they'll be the envy of the new, working-class suburb they've moved to.

But underneath the surface of the perfect family, is there something unsettling about the Jensons?

To the local kids, Rex becomes a kind of hero, but Colt senses there's something in his father that could destroy their fragile new lives.

Colt and Bastian Jenson have everything boys could wish for. New skateboards, new bikes, train sets and soon a new pool as well.

So why does Colt feel so much unease when his father is around the new neighbourhood kids?

The Kiley family and the Jenson family become entwined as their children deal with issues that no children should ever be faced with – a drunk and abusive father in one family and a pervert in the other.

This story is definitely for your older readers given the themes but, in true Sonya Hartnett style, it is extremely hard to put down. A child’s view of an at times harsh and fragile adult life, the main characters come to realise that the choices made when you are younger can have long lasting consequences. It also shows the true strength of character and resilience of the human spirit. As the last sentence of the story says, despite everything, “Life goes on”.