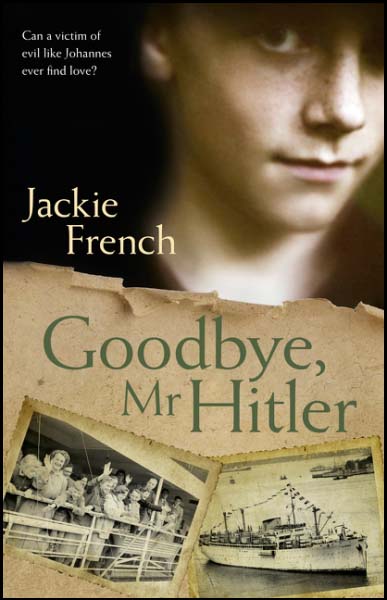 This is the story of Johannes, and Frau Timmins, and the strange girl now known as ‘Helga'. It is also the story of how they survived the death camps, the vast wilderness faced by refugees in World War Two, and how they eventually found happiness in Australia.

The final title in the multi award-winning Hitler series, this compelling story follows on from Heidi's story in Hitler's Daughter and Georg's in Pennies for Hitler, and shows us that evil must be fought and won. But once you've won, the hardest and most necessary battle is to understand and forgive. And to learn how to love and live again.

This is a very moving and confronting story of the lives of Johannes, Frau Timmins and Helga, nearing the end of WWII, and the rebuilding of their lives after the war ended.

Johannes, a young boy forced from him home, finds himself in a concentration camp, and all the horrors associated with it. Frau Timmins is a nurse who has lost her husband and has had to send her son away to be safe, but also finds herself at the mercy of the Germans. Helga is a young girl who just wants to help others during this time, but there is something strange about her that Johannes just can’t explain.

It is a story of the brutality of war and the suffering that many endured, but it is ultimately about family, friendship, hope and letting go of the hate so love can rule your heart.

Written as a companion book to Jackie’s other titles, Hitler’s Daughter and Pennies For Hitler, it is a ‘stand alone’ title, and will certainly encourage your students who enjoyed this book to read the others.

It could easily be used in high schools as well as primary, and is suitable for those in Year 5 and above.