Hectic Electric - How to Hypnotise a Droid 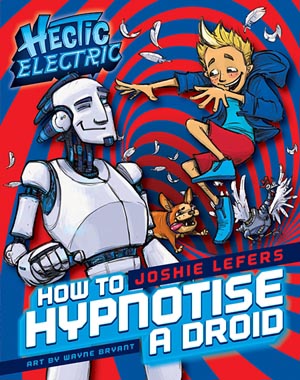 This madcap comedy-adventure series is completely hectic – and also heart-warming, ridiculously funny and wildly addictive! One day, Joshie is eating breakfast when a fancy robot thingy arrives in a box.

The cool thing? It’s actually an incredibly sophisticated droid. The not-so-cool thing? It’s programmed to babysit Joshie while his mum is at work (which is ALL THE TIME).

Joshie has scared off a LOT of babysitters, but that’s only because he DOESN’T NEED A BABYSITTER. And he has big plans to get rid of this one too. But he’s not counting on Droid Dude being kinda fun – or all the whole new level of sticky, icky messes you can get into when your babysitter has an off switch!

Joshie is 10 years old and he doesn't need a babysitter. At least, that’s what Joshie thinks. Unfortunately for Joshie, his scientist mum disagrees.

But when a huge box marked TOP SECRET arrives one morning, Joshie can’t help but open it, even though Mum said he had to wait until after school.

So begins a hilarious, completely hectic, crazy and funny adventure that you will love.

This is the first of four books in this series, and it will be a hit with those who love a laugh when they read. It is also heart warming, with characters that are great fun.

This series is sure to be a winner with those starting out on chapter books.