In The Skin of a Monster 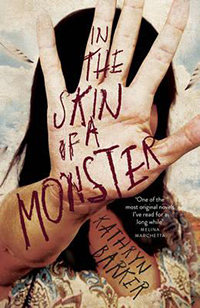 Caught in a dreamscape, mistaken for a killer... will Alice find a way home? Three years ago, Alice's identical twin sister took a gun to school and killed seven innocent kids; now Alice wears the same face as a monster.

She's struggling with her identity, and with life in the small Australian town where everyone was touched by the tragedy. Just as Alice thinks things can't get much worse, she encounters her sister on a deserted highway.

But all is not what it seems, and Alice soon discovers that she has stepped into a different reality, a dream world, where she's trapped with the nightmares of everyone in the community.

Here Alice is forced to confront the true impact of everything that happened the day her twin sister took a gun to school ... and to reveal her own secret to the boy who hates her most.

Monsters are only in dreams, aren’t they?

When Alice’s identical twin shot seven people at school in Collector, the population was only 875. Alice’s face becomes that of a monster. The people of Collector can’t come to terms with their grief, and neither can Alice and her Dad.

Alice has spent time away to learn to cope, but now that she is back, what will happen? She likes to walk to the outskirts of town, but is she just tempting fate, hoping for an act of revenge?

On one of these walks a boy whose younger sister was killed is following Alice when she spots the ghost of her sister, Kell and with a mere touch they exchange places, with Alice going in to the dream world.

Normally this sort of storyline would be a stretch too far for my liking, but this story really took you on a journey. I was enthralled by the idea of this dream world where the nightmares of the town people go.

Three years ago the dream world had a huge influx of nightmares where the monster is a girl dressed in a school uniform. We see the towns torture and fears, but can Alice help to ease these nightmares? But first can she even change back?

This is a real page turner that I read in one sitting. I found the characters exciting and the story enlightening. The content will probably most appeal to upper secondary girls.