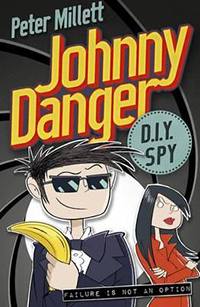 Johnny Danger has always dreamed of being a spy. He's even created a fake web page posing as secret agent Johnny Danger - complete with crazy gadgets and awesome assignments.

M16 are on the lookout for a new recruit, and they think Johnny is the real deal.

So begin the adventures of Johnny danger DIY Spy - and his hothead sidekick Penelope Pounds - as he finds himself on a mission to save the world, capture a villain, and stay one step ahead of everyone.

Because if people find out Johnny danger is just a school boy pretending to be a spy, it could mean the end of his dreams. And the end of Johnny . . .

Imagine you are a would-be primary school age spy when you are suddenly taken to MI6 to save the world from the evil Dr Disaster.

That’s what happens to Johnny Danger!

All of a sudden, he has at his disposal all of the ingenious gadgets that he had dreamed of at home. Bubblegum parachutes, bogey bombs and the coolest car are all Johnny’s, as is a whole lot of money. But will MI6 realise Johnny is not a master spy or can he miraculously fluke stopping Dr Disaster?

I’m sure you can guess the answer!

Younger 9-12 year old boys will enjoy the nonsense, the gadgets and Johnny’s wonderful attitude in this Australian written title, the first in a new series.