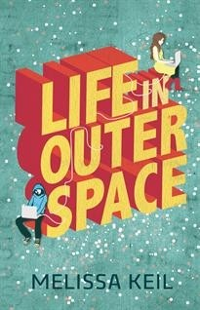 Sam Kinnison is a geek, and he's totally fine with that. He has his horror movies, his nerdy friends, his World of Warcraft - until Princess Leia turns up in his bedroom, worry about girls he won't.

Then Camilla Carter arrives on the scene. She's beautiful, friendly and completely irrelevant to his plan. Sam is determined to ignore her, except that Camilla has a plan of her own - and he seems to be a part of it!

Sam believes that everything he needs to know he can learn from the movies. But perhaps he's been watching the wrong ones.

We were rapt when the small, but rapidly growing Australian publisher, Hardie Grant Egmont, announced a new award for emerging Australian authors - the 'Ampersand Project'. Authors could submit scripts with the winning author not only getting their book published, but gaining an ongoing writers contract.

Life in Outer Space and Melissa Keil won the inaugural award - and it's easy to see why.

This is a true romantic comedy with all of the necessary ingredients. Geek boy, horror movie buff Sam meets new, hot and cool music chick Camilla. She has everyone noticing her and has the power to change the image of Sam and his whole geeky group.

Sam doesn't even notice the emerging love, thinking that his growing obsession with Camilla needs to be stopped before he makes a complete jerk of himself.

With lots of great moments and an issues based contemporary plot, these characters will endear themselves to your readers.

Suitable for middle secondary students, particularly girls, even though the main character is male.