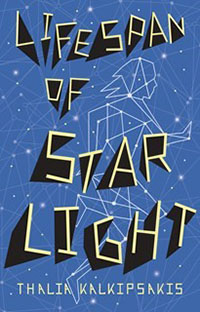 The first in a thrilling new trilogy of epic proportions from best-selling children's author Thalia Kalkipsakis. A fresh take on the time tripping genre, The Lifespan of Starlight is Gattaca meets The Time Traveler's Wife.

It already lies dormant within you: the ability to move within time. In 2084, three teenagers discover the secret to time travel. At first their jumps cover only a few seconds, but soon they master the technique and combat their fear of jumping into the unknown. It's dangerous. It's illegal. And it's utterly worth it for the full-body bliss of each return.

As their ability to time jump grows into days and weeks, the group begins to push beyond their limits, with terrifying consequences. Could they travel as far as ten years, to escape the authorities?

They are desperate enough to find out. But before they jump they must be sure, because it only works in one direction. Once you trip forwards, there's no coming back.

This is a wonderful first instalment in a series that will get you thinking. Is time travel really possible?

Coutlyn (Scout) is an unchipped illegal, and in 2084 this is extremely dangerous. All citizens are chipped and everything in their life, including food and water rations are controlled by it.

Fourteen year-old Scout, and her Mum, have lived like this all her life with Scout being ‘off the grid’. Always making do on her Mum’s rations and telling lies and stories to cover up the truth of her existence. But all this changes when Scout comes across the strange, dying woman in the cave. Could this possibly be her chance to get a chip? She can’t believe what she has just seen or what she then does. This decision will change her life.

However, it is her meeting up with Mason and Boc, and their fascination and obsession with their new found ability to ‘skip’ that will be the ultimate risk. What have they really got themselves into and how will they get out of it?

Set in a futuristic Melbourne, girls, particularly those in Year 7-10, interested in the possibility of time travel will thoroughly enjoy this and be looking forward to the next instalment.