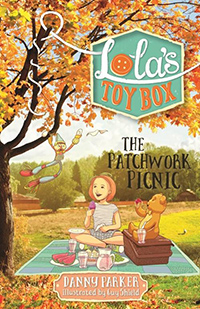 When Lola is given an old toy box, she discovers it’s a magical passageway …

To a world where toys come to life! Do teddy bears really have picnics? Are plastic toys really nastier than soft ones? Follow Lola and her trusty but rather wonky learn-to-dress clown, Buddy, on their adventures in the Kingdom, where toys live when they aren’t being played with in the real world.

This is a new series by Danny Parker, that will have your imagination running wild.

When Lola and her family are having a clean up at home, Lola finds an old toybox. When Lola’s bossy brother Nick demands it from Lola, she is determined that he is not getting it. She jumps into the toybox with her favourite toy, Buddy, a learn-to dress clown.

Together they embark on an adventure that takes them to the Kingdom where toys go when they are not being played with. This is something that Lola has never thought about before and I am sure it will get you thinking about your forgotten toys too!

It is not all fun in the Kingdom though, as Buddy and Lola get caught up in the middle of an on-going feud with the Plastic Prince.

This is a wonderful adventure that middle level girls will love. The first in a new series, they will thoroughly enjoy getting to know Lola!