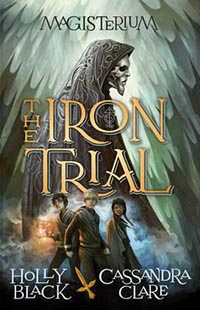 From the imaginations of bestselling authors Holly Black and Cassandra Clare comes a heart-stopping plunge into the magical unknown.

Most people would do anything to get into the Magisterium and pass the Iron Trial. Not Callum Hunt. Call has been told his whole life that he should never trust a magician. And so he tries his best to do his worst - but fails at failing.

Now he must enter the Magisterium. It's a place that's both sensational and sinister.

And Call realizes it has dark ties to his past and a twisty path to his future.

The Iron Trial is just the beginning.

Callum Hunt is only twelve years old when he is invited to a trial for the Magisterium.

A trial in which his father has drummed into him he must fail, as you ‘never trust a magician.’ Even though Cal manages to fail spectacularly, he is still selected by Master Rufus as his apprentice. His life begins to change in many ways as he works together with Aaron and Tamara, his two roommates to navigate the Magisterium.

This is a fast paced fantasy full of adventure, mystery, magic and friendship. It was a compelling read that was really hard to put down and will be loved by all fans of J.K Rowling and Rick Riordan.

Perfectly suited to both boys and girls, Year 7 and up, this series is sure to be a hit with your students.