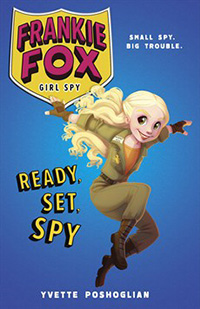 Meet your new hero, Frankie Fox! What would you do if you found out your were secretly being trained as a spy?

Frankie Fox is about to find out! When Frankie's billionaire scientist dad is kidnapped by a mysterious evil group, the Alliance, it's up to her to crack the case.

To succeed in this mission, she'll have to solve mind-bending puzzles, work head-spinning gadgets and outwit ruthless bad guys.

Is Frankie ready to go from schoolkid to superspy?

Frankie Fox is not your average 11 year old girl. She likes fencing and motorcross in the way that other girls like teddy bears! And she has always wanted to be a spy.

Frankie lives with her father, Fergus Fox, a rich scientist, and her house-keeper Hanna. Her Dad is often not home, spending most of his time at ‘The Fortress’.

But weird things have been happening - she is sure someone is spying on her.

Frankie then meets JJ. He used to live next door to her when they were young and the two of them become friends. When they both attempt to go and visit her Dad, things become a whole lot more complicated.

They find themselves in the middle of her Dad’s kidnapping and at the centre of a spy mission. Frankie’s wish of becoming a spy is coming true - just in the way that she planned, but can they put their spy skills to the test and help save her Dad?

A fantastic new action series for your middle level girls.