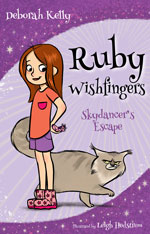 Ruby Wishfingers is an ordinary girl with an extraordinary name. Only nobody else seems to think so. That is until Ruby Wishfingers wakes up with a strange feeling in the tips of her fingers.

She soon finds out that there is far more to being a Wishfingers than having a funny name. Ruby can wish for whatever she wants with her wish fingers. However, she soon realises that they create more trouble than good. Ruby Wishfingers will take you on a magical adventure, featuring talking cats, jelly bean rain and pocket-sized unicorns.

How would it be to have anything that you wished for?

When Ruby Wishfingers, who had always wondered why she had such a magical name, discovers that she really has inherited the family’s gift of ’wishfingers’, she thinks it is the most amazing thing ever.

What will she wish for first? Her favourite toy, Skydancer the unicorn to be real of course! But not all goes according to plan and Ruby soon discovers that having everything that you wish for is not as good as it seems.

A great, fun read for your junior to middle year girls.