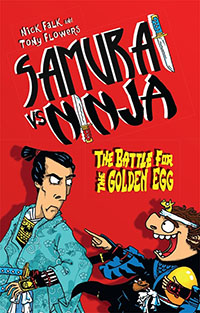 Get ready for the greatest battle of all time! In the Edo Period of Japan, two teams fight for supremacy - the serious samurai and the scheming ninjas.

To determine who is the best, a deadly contest is held.

The prize is the Golden Egg, the most magnificent treasure in all of Japan.

But when the ninjas cheat, the samurai will stop at nothing to get revenge.

Tighten your topknot and sharpen your sword - the Samurai vs Ninja battle is about to begin!

In Ancient Japan, two sworn enemies battle for the Golden Egg - The Samurai and the Ninja’s. Who will win?

So follows an hilarious battle full of ridiculous threats, lots of cheating and much giggling (mostly from the Ninja’s).

Complete with amazing detailed illustrations from Tony Flowers, this is sure to be another highly popular series that your students will love.

It will suit reluctant boy readers really well, but any student, boy or girl, Year 3 and up who enjoys a laugh will love this book.