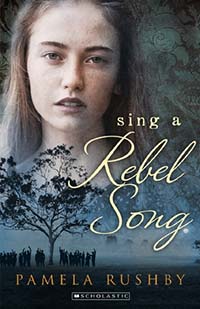 It's 1891. Maggie McAllister and her family are caught up in one of the most dramatic events in Australia's history: the Shearers Strike.

The trouble that erupts between the Shearers Union, the pastoralists and the government has never been seen before on the quiet streets of Barcaldine. Maggie plays her part in the Unions struggle in no small way herself, through her writing.

Her friends, a local pastoralist family, do not see things the same way, and for Maggie, singing a rebel song may yet have heartbreaking consequences.

Pamela Rushby has combined both fact and fiction in this story set during the Shearers Strike of 1891.

Times are tough and the workers are starting to fight for their rights against the wealthy land owners. They decide they must stand up for what they believe is only fair and just.

Maggie McAllister is a wonderful, spirited young girl who finds herself in the middle of the fight between the Union, which her father is a major part of, and her friends the Avery’s, the pastoralist family her Dad usually shears for.

In an era when a woman’s place was in the home, Maggie is ahead of her time, and dreams of becoming a journalist. Maggie and her mother find themselves the link that allows the Union to get their message across, by writing and putting up notices around the town for all the striking shearers to see.

Her friendships with Clara Avery and her older brother James are ones that Maggie cherishes, but they are becoming increasingly difficult to maintain with the tensions over the strike. There is a common respect for each other’s views, but can their friendship survive the chaos?

Aimed at senior primary to junior secondary students, girls in particular will love Maggie and her determination.