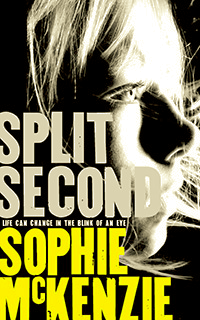 Bound together by the devastating consequences of a terrorist attack on a London market, teenagers Charlotte (Charlie) and Nat appear at first to have much in common.

But, as Charlie gets closer to Nat and his family, she begins to wonder if perhaps he knows more about the attack than he has let on.

Split Second is an action-packed thriller that shifts between the perspectives of its two main characters as their courage and their loyalties are tested to the limit.

London. Six months since a devastating terrorist attack. Charlie and Nat walk past each other a moment before impact. Charlie’s mother died. Nat’s brother has been in a coma for six months since the explosion.

Charlie and Nat’s paths cross again when Charlie moves in with her Uncle and Aunt and goes to Nat’s School. Charlie and Nat are attracted, but fate has a way of keeping them apart.

With each voicing alternating chapters, we get an insight into their pain and desire for revenge in a city where poverty and recession have changed the landscape and world outlook. But who to trust and who is responsible?

The League of Iron, who claimed responsibility for that blast and much more? The English Freedom Army (EFA) who tell them revenge is possible? The Future Party with its in your face leader, Roman Riley?

Or are the they just pawns in a great political plan, a plan that could see them killed as a part of an EFA infiltration cell?

The story is action packed and draws the reader in - you will find yourself cheering for the main characters, hoping that they will survive, and maybe even fall for each other.

This book was included in our October 2013 Secondary Standing Order selection.