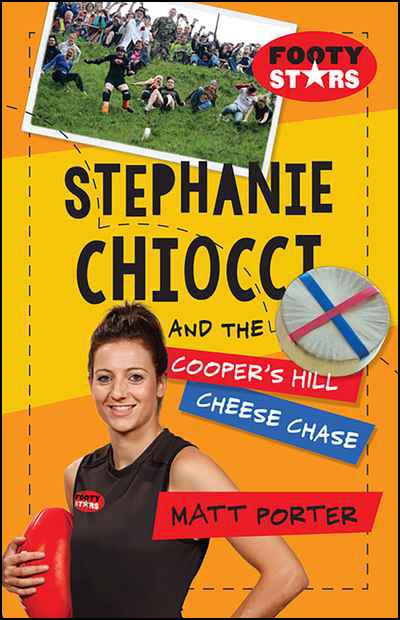 Standing at the summit of Cooper’s Hill in England, Stephanie Chiocci prepares to barrel down a slope steeper than the MCG grandstands. But winning the annual Gloucester Cheese-Rolling Race is just one of her objectives.

The Collingwood AFLW captain has also taken it upon herself to save the family cheese-making business of one of her biggest fans. To do so Stephanie must defeat local toff Neville O’Shea in one of the world’s most dangerous foot races. Full of footy skills and references this hilarious book sees Stephanie Chiocci jetting to England to take on a local bully in the world-famous Gloucester Cheese-Rolling Race.

Tasked with winning the race to save a family cheese-making business, Stephanie must call upon her elite football abilities and also utilise the help of an inventive fan.

This book will be a hit with sports loving students.

Stephanie Chiocci is the captain of the AFLW team Collingwood, but can she use her footy skills to win the Cooper’s Hill Cheese Chase? She is up against a feisty and sneaky opponent, and Stephanie has never raced a cheese wheel down a hill before!

Stephanie has answered a call for help from one of her biggest fans, and now finds herself on the other side of the world, trying to save the fan’s family cheese business. To do so though, she must beat Neville O’Shea. It is going to call on all her football experience, skill and determination to win this one.

This is a great read for mid—upper primary students. It is full of fun footy talk and humour, and also has a great messages about backing yourself and having a go.