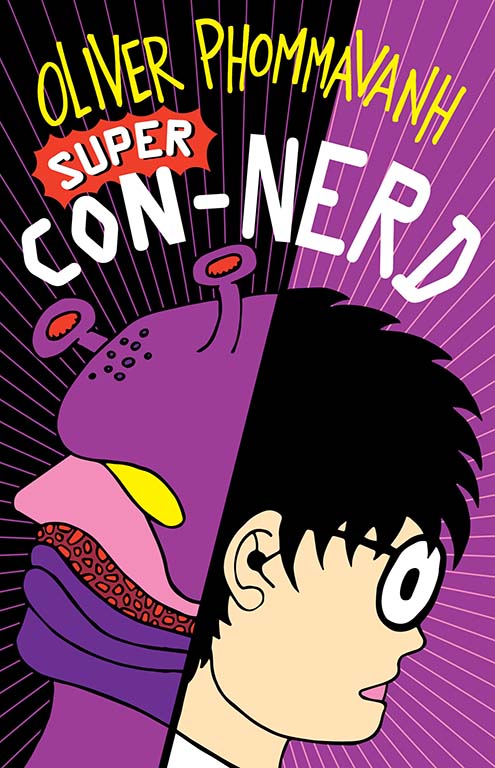 Hi, I'm Connor and I'm a nerd. I thought I knew all there was to being one. But there are better nerds out there. Super nerds. Hyper nerds. Super, hyper nerds. I thought all nerds were smart. But that's not true, because suddenly I don't feel so bright anymore.

Our favourite character from Con-nerd returns in Super Con-nerd, where he finally makes it into a selective high school. If he thought the competition was intense to get into a selective school, it's tougher on the inside. Connor feels like everybody else is smarter than him and is trying to play catch up with the other super nerds, like Andrew Thompson who is top of his class.

Connor's mum has loosened up and lets Connor draw his comics like Fireproof Knights, as long as his grades are good. Luckily, there's no report cards after the first week of school.

Oliver Phommavanh has done it again! He really does just have a way of portraying what life is like for kids, especially a nerdy one!

Connor, or Con-Nerd as he is known by his friends, has just started at the ‘Selective Entry’ school, Kentsworth High School. You would think that a nerd would fit right in here! But not Connor. He finds himself completely out of his depth, and is no longer the smartest one in the class.

But Connor really just wants to draw. He is only at this school to keep his family happy, particularly his ‘Tiger Mum’. How is he going to manage to keep up with his studies and keep his dream alive of being a cartoonist? Especially when his old friends from primary school seem to have deserted him. Connor is struggling to find any new friends at high school, and is having to deal with the constant ‘know-it-all’ Andrew Thompson.

This is a fantastic insight into the pressure and issues that many kids feel during the transition from primary to high school, including the smart ones! It is a wonderful story of forging new school relationships, hanging on to old friendships and being true to who you really are.
It will be thoroughly enjoyed by all Year 5 & 6’s, as well as junior secondary students.