Take Back the Skies 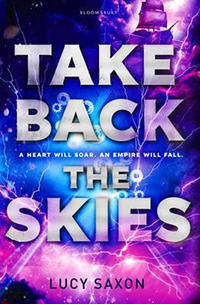 Catherine Hunter is the daughter of a senior government official on the island of Anglya. She's one of the privileged - she has luxurious clothes, plenty to eat, and is protected from the Collections which have ravaged families throughout the land. But Catherine longs to escape the confines of her life, before her dad can marry her off to a government brat and trap her forever.

So Catherine becomes Cat, pretends to be a kid escaping the Collections, and stows away on the skyship Stormdancer. As they leave Anglya behind and brave the storms that fill the skies around the islands of Tellus, Cat's world becomes more turbulent than she could ever have imagined, and dangerous secrets unravel her old life once and for all . .

Cat, dressed as a boy, stows away on the skyship Stormdancer where she meets the gorgeous Fox and is quickly taken in by him and the rest of the small crew.

She soon discovers that the government has been filling the people with lies about a war that finished years earlier, and experimenting on children to turn them into fighting machines.

Can Cat and her team show the world the truth and overthrow the corrupt government?

Pitted against her heartless father, how far will Cat be prepared to go?