The Guy, the Girl, the Artist and His Ex 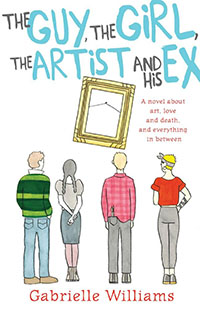 An artist with attitude.

A girl with a past.

Four lives collide when one of the world's most famous paintings is stolen. It's a mystery that has the nation talking, but while Picasso's Weeping Woman might be absent from the walls of the National Gallery, in other parts of Melbourne the controversial painting's presence is being felt by Guy, Rafi, Luke and Penny for four very different reasons.

Life, love, art and one giant party intersect in this offbeat comedy about good intentions, unexpected consequences and the irresistible force of true love.

With the back story being the 1986 theft of Picasso’s ‘Weeping Woman’ from the National Gallery in Melbourne, this enthralling contemporary work of fiction is the first of a new trilogy.

Our characters are appealing, particularly Guy, (The Guy) and Rafi, (The Girl) who try to achieve in the face of adversity.

The four main characters lives are intertwined even though they are unaware of this and I found the story both funny and at times dark.

The themes of madness, crime and love set in an artists world make this an ideal read for those 15+