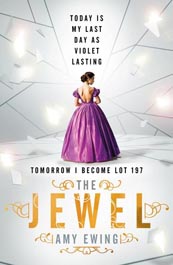 This is a shocking and compelling new YA series from debut author, Amy Ewing. The Handmaid's Tale meets The Other Boleyn Girl in a world where beauty and brutality collide.

Imprisoned in the opulent cage of the palace, Violet learns the brutal ways of the Jewel, where the royal women compete to secure their bloodline and the surrogates are treated as disposable commodities. Destined to carry the child of a woman she despises, Violet enters a living death of captivity - until she sets eyes on Ash Lockwood, the royal Companion. Compelled towards each other by a reckless, clandestine passion, Violet and Ash dance like puppets in a deadly game of court politics, until they become each other's jeopardy - and salvation.

It will appeal to fans of dystopian, dark romance, stepping beyond the paranormal craze. It is perfect for fans of Allie Condie and The Hunger Games. It is a debut novel from a radical new voice in YA.

It is the first book in The Jewel trilogy.

Another wonderfully written title by award winning author Kirsty Murray. The Year It All Ended is an interesting and different view of WWI.

It follows the lives of the Flynn family from Adelaide, who have one son and four daughters, and how the war affected them.

Their mother is a German and their cousin is being interred for the duration of the war, and his brother fighting on German’s side, there are a wide variety of viewpoints portrayed in this story.

Mostly the story follows the youngest Flynn daughter, 17 year old Tiney (Martine). Whilst small in stature, this remarkable girl’s strength shines through, as she sees and copes with life in the war’s aftermath.

She wishes, and ultimately travels to the battlefields of France and Austria to gain some closure and insight into the reality.

Will Tiney find hope and love to sustain her and make her life happy again?

A great book for 15+ girls, that takes an insightful look at the impact of the war on average Australian families.