The Right To Vote 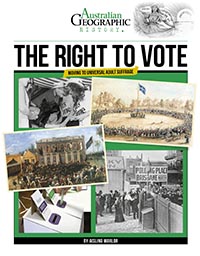 Australia's colonies were among the world's leaders in opening up the right to vote to all adult males and then all adult females.

With this came the right for anyone to stand for election to an Australian parliament.

This is the story of the battle for universal suffrage and the removal of political power from the hands of a few wealthy and influential individuals between the 1840s and the early 20th century.