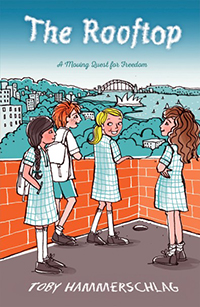 The Rooftop is set against a quintessential Sydney background. At Darlinghurst East Public School, Emma, Maha, Simon and Talia, learn about themselves and each other through the unusual combination of Scripture class and netball.

As Mr. Zulman reveals the story of the Exodus to the students, they reveal their own stories to each other: Simon’s parents are separated and warring with each other. Talia’s dyslexia makes the classroom an everyday struggle. Maha’s family is facing deportation back to war-torn Iraq, and, Emma, who has lived all her life in Sydney, begins for the first time to appreciate the value of freedom.

Outside of class as the netball season progresses, freedom takes on a new meaning for the four students when on the day of the netball finals, Maha and her family face the very real prospect of deportation.

Set at the start of a school year in a fictional inner Sydney school, four kids become friends by first being in a scripture class and then being involved in a netball team.

Mr Zulman teaches them the idea of freedom as they all have their own personal ideas and experiences.

Three of the kids are new to the school - Simon through the divorce of his parents, Talia through a desire want to start over because of her learning difficulties and Maha whose family have recently arrived form Iraq.

Emma is just a nice kid who brings them all together as she begins to understand other peoples troubles. This culminates when Maha’s family face their impending deportation back to Iraq.

Freedom then becomes a very real issue for our four friends.

This is an uplifting and topical story of migration, friendship and equal rights for all that will suit readers in upper primary.