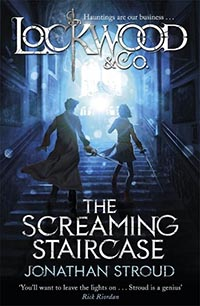 The book sensation of the year from global bestselling author, Jonathan Stroud.

Hauntings are our business . . .

Ghosts crowd the streets and houses of London. Anthony Lockwood, with his slightly grumpy deputy George, and his junior field operative Lucy, make up LOCKWOOD & CO, the small, shabby yet talented ghost-hunting agency.

After a series of calamitous investigations into the supernatural go awry, the team are desperate to prove themselves. Their opportunity comes in the form of a terrifying ghost, the Red Duke. But little do they know what perils lie in store for them at the haunted Bliss Hall . . .

I don’t generally enjoy ghost books but this was a truly engrossing read - the intensity just kept rising.

Enter a world where ghostly activity has become the norm, with The Problem increasing around 50 years earlier. Two young researchers discovered its source and it has since been established that younger children, certainly those under 15, have much more
sensitivity to paranormal activity - meaning they are the ones who tackle The Problem. This mostly happens at night and under the supervision of an adult.
Not so with Lockwood & Co - a small investigative agency consisting of Anthony
Lockwood who can see the Visitors, investigator and Anthony’s long term friend George, and new member Lucy, who has recently moved to London.

Lucy has the terrific skill of hearing the Visitors speak and being able to feel their suffering and fate through touch. But when our investigators come across a 50 year old skeleton and a murder mystery, their world and their agency are suddenly faced with a life or death situation— the perpetrator is now rich and powerful and wants to keep her secret hidden.

A marvellous first instalment of a series that will be a huge hit with those old enough to read it and cope with the HAUNTINGS!!!

This book was included in our September 2013 Secondary Standing Order selection.