The Shop At Hoopers Bend 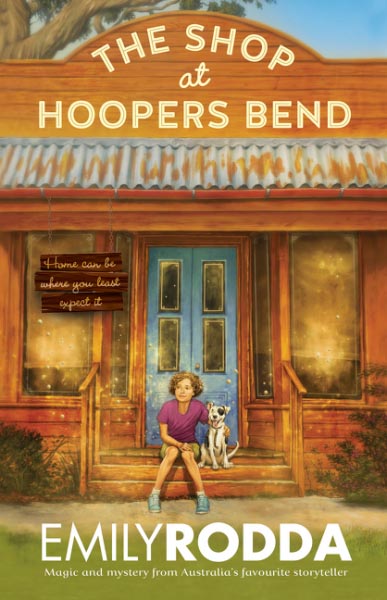 From one of Australia's most renowned children's authors, this is a story about coming home when you didn't even know that was where you belonged. Eleven-year-old Jonquil (known as Quil) Medway is a girl with more than an unusual name. Quil's parents died in a car accident when she was a baby and she now goes to boarding school, but spends her holidays with an aunt - or at camp, which is where Quil is heading when she decides to get off early at a train stop called Hoopers Bend.

It is there that Quil meets Pirate, a chunky little white dog with black spots who immediately adopts her and Bailey, a crabby older lady who has gone to Hoopers Bend to check out the shop that has been left to her by an uncle. There is something magical about the shop at Hoopers Bend though, and once it casts its spell on Quil and Bailey they are drawn together in an unlikely friendship and their fight to save the shop from developers.

In true Emily Rodda style, this story has it’s own magical charm and mystery to solve, and it will weave its way into reader’s hearts.

Quil, Pirate the dog, and Bailey should never have met, let alone become friends, but there is something mystical about Hoopers Bend shop that draws them all there at the same time.

Unlikely visitors, old friends from Bailey’s past, a long lost will and an unexplained fire, all immerse Quil and Bailey in the mystery of the Hoopers Bend shop. Do they have the courage to find out the truth about the past and forge a new future for the shop?

This will be most loved by girls in Year 4 and up, who like strong characters and interesting storylines. It is sure to become another favourite!