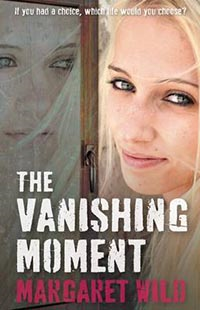 A moment. That's all it takes. A bewildering moment when the world spins upside-down, and then life can never be the same again.

Arrow was just a girl when she saw something no child should have to see. And Marika is living a sister's worst nightmare...

When Arrow and Marika come together in a small seaside town, they meet a mysterious 'magician' who says he knows how to escape the now and step into a new future.

A brilliant and bittersweet story of loss and courage, with a surprising twist.

Arrow is only a child when she is confronted with a scene of unimaginable horror. In that moment, she is certain that she hears a voice ask if she wants to 'Interchange'.

The impact of that night ripples across Arrow’s life – her world is shattered, her family moves away, her mother is a changed woman. But something draws Arrow back to the place it all happened…

Marika is a responsible, caring, older sister. But all it takes is an instant, a moment’s distraction to shatter her family and to land Marika in the middle of every sister’s worst nightmare.

Wracked with guilt, and with her family falling apart, Marika is forced to spend some time away...

That’s when she meets Arrow and their tragic tales become entwined – with the fate of each other, of those around them, and with one massive question – what if?

What if in a moment of tragedy you could swap lives with another you living in another world? What if you had no idea of the consequences and only a second to decide? Would you take the chance?

A haunting tale of tragedy, fate and regret that is as sad as it is intriguing. The bittersweet ending leaves the reader contemplating the enormous consequences that one decision can have on many lives, if only that one decision had been different…

This is a gripping read (I finished the whole book in one go) but the content is incredibly sad and tragic and likely to bring your readers close to tears.

The pain felt by the characters is brilliantly captured and expressed by Margaret Wild and draws you into their stories.

Given the content, this book is best suited to middle to upper secondary students. The story is not overly gender specific but both of the main characters are female and the cover lends itself more towards girls.

This book was included in our September 2013 Secondary Standing Order selection.