The Year It All Ended 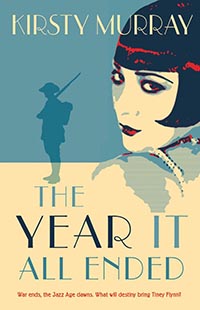 On Tiney Flynn's seventeenth birthday, every church bell tolled as if heralding a new year, a new era. Tiney stood in the garden, purple jacaranda petals fluttering down around her.

One by one, her sisters came outside to join her; first Nette, then Minna and lastly Thea. It was 11 November 1918. Armistice Day. For Tiney and her sisters, everything is about to change, but not in the way they might have imagined. Building peace is complicated; so is growing up.

From tragedy to undreamt-of joy, from weddings to seances, from masked balls to riots in the streets, Tiney’s world will be transformed. At the end of the war and the dawn of the Jazz Age, Tiney Flynn must face her greatest fears and begin a journey that will change her destiny.

Another wonderfully written title by award winning author Kirsty Murray. The Year It All Ended is an interesting and different view of the end of WWI.

It follows the lives of the Flynn family from Adelaide, who have one son and four daughters, and how the war affected them all, but particularly those left behind.

Mostly the story follows the youngest Flynn daughter, 17 year old Tiney (Martine). Whilst small in stature, this remarkable girl’s strength shines through, as she sees and copes with life in the war’s aftermath.

In particular, she struggles to cope with the death of her brother on battlefields far away. Ultimately, she travels to the battlefields of France and Austria in an attempt to find some closure.

Will Tiney find hope and love to sustain her and a reason to be happy again?

An emotional book for 15+ girls that takes an insightful but different look at war as, rather than concentrating on the terrible conflict and the soldiers who fought it, it follows the family members of a soldier that have been left behind. An exploration of the far reaching consequences of war - particularly that it is not only those that fought in battle that need to heal, and how this healing can extend well beyond the armistice.