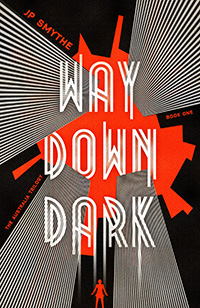 There's one truth on Australia. You fight or you die. Usually both. Imagine a nightmare from which there is no escape. This is a hell where no one can hide.

This is a ship of death, of murderers and cults and gangs. This is Australia. Seventeen-year-old Chan's ancestors left a dying Earth hundreds of years ago, in search of a new home. They never found one. The only life that Chan's ever known is one of violence, of fighting.

Of trying to survive. But there might be a way to escape. In order to find it, Chan must head way down into the darkness - a place of buried secrets, long-forgotten lies, and the abandoned bodies of the dead.

Seventeen-year-old Chan, fiercely independent and self-sufficient, keeps her head down and lives quietly, careful not to draw attention to herself amidst the violence and disorder. Until the day she makes an extraordinary discovery - a way to return the Australia to Earth.

But doing so would bring her to the attention of the fanatics and the murderers who control life aboard the ship, putting her and everyone she loves in terrible danger. And a safe return to Earth is by no means certain.

Set on a large space ship city ‘The Australia’ that left Earth hundreds of years earlier, seventeen year old Chan is trying to stay out of the way and unnoticed in order to keep herself safe after her mother’s recent death. People fear Chan, as they did her mother, who they thought to be a witch.

But life on board is turning chaotic with different groups trying to gain control. The Lows are beginning to capture and kill many of Chan’s friends and she must decide if she should answer this violence with her own.

When Chan discovers that many long held beliefs may be wrong, particularly whether The Earth actually exploded, and that there may even be the chance to return, her world changes. She begins by saving innocent children and families and prepares for their return journey to earth.

But a safe return is by no means certain and if successful, what will this ‘Earth’ actually be like?

This is an action packed, violent and engrossing read that is also thought provoking, with questions of beliefs, the cost of survival and community spirit.

Part of a new dystopian trilogy, it is sure to impress fans of the Hunger Games and Divergent series.