When Rain Turns to Snow 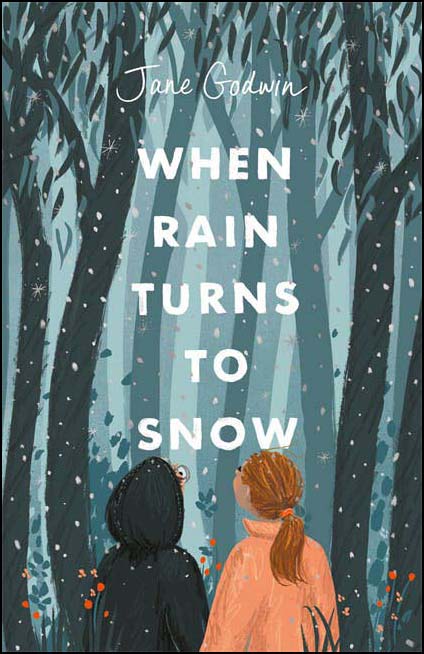 A runaway, a baby and a whole lot of questions... Lissa is home on her own after school one afternoon when a stranger turns up on the doorstep carrying a baby. Reed is on the run - surely people are looking for him? He's trying to find out who he really is and thinks Lissa's mum might have some answers. But how could he be connected to Lissa's family - and why has he been left in charge of a baby?

A baby who is sick, and getting sicker… Reed's appearance stirs up untold histories in Lissa's family, and suddenly she is having to make sense of her past in a way she would never have imagined. Meanwhile, her brother is dealing with a devastating secret of his own.

A beautiful and timely coming-of-age story about finding out who you are in the face of crisis and change.

As a complete bibliophile, I am always taken in by an author’s magical use of rarely used words, and Jane is a master of this.

Lissa is a thirteen-year-old struggling with friendship issues, when she discovers Reed, who is a similar age, on her doorstep with a baby in his arms. Reed has recently found out that he was adopted, and with his drug addicted brother’s baby in tow, searches them out as he believes that Lissa’s mum is also his mum.

Lissa’s family situation is already complicated enough. Harry is Lissa’s seventeen-year-old brother, and he is being slammed on social media for something he didn’t do. He is facing his own identity issues and emotional turmoil. Lissa’s Dad has a new wife and new life in Beijing, and twins are now on the way. And then there are Lissa’s Mum and her new boyfriend, Troy.

But the absolute highlight and crux of this story is Lissa’s own journey and identity. I do not want to give anything away - you simply must read it yourself. The friendship and bond formed by Lissa, Reed and baby Mercy is paramount to this story, and it a beautiful story of friendships formed through hardship, and links that will last a lifetime.

Jane has truly written a classic Australian story that will be read for years to come. With themes of family, identity, the impact of social media, and personal development, this is a great read for those aged 12-15.