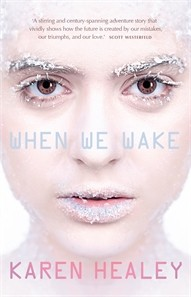 Sixteen-year-old Tegan is just like every other girl living in 2027 - she's happiest when playing the guitar, she's falling in love for the first time, and she's joining her friends to protest the wrongs of the world: environmental collapse, social discrimination and political injustice.

But on what should have been the best day of Tegan's life, she dies - and wakes up a hundred years in the future, locked in a government facility with no idea what happened.

Tegan is the first person to be cryonically frozen and successfully revived, which makes her an instant celebrity - though all she wants is to rebuild some semblance of a normal life... including spending as much time as possible with musically gifted Abdi, even if he does seem to hate the sight of her.

But the future isn't all she hoped it would be, and when appalling secrets come to light, Tegan must make a choice: does she keep her head down and survive, or fight for a better future?

Tegan Oglietti's life is finally coming together and, at the age of sixteen, she is finally really happy. Then everything changes!

Tegan finds herself reborn into a world one hundred years in the future, the first cryonically frozen person to be brought back to life. But this raises many questions...

When should medicine involve itself in world change, and is this for the better?

Should people be reintroduced into a world that can't feed the people currently alive?

Fast paced, and exciting, with a love-hate romance, 14 to 18 year olds will love the story.

This book was included in our February 2013 Secondary Standing Order selection.