You Don't Even Know 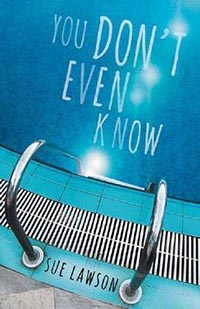 Alex Hudson is a good guy. He plays water polo. He has a part-time job. He’s doing okay at school. Then the thing that anchors Alex is ripped away and his life seems pointless.

How can he make anyone else understand how he feels, when he doesn’t even know?

This is a fabulous book — but it is very confronting and emotional.

For Alex, it seems the whole world is against him, especially his domineering father and older brother Ethan, who is his clone. All that they seem to care about is the prestigious school that the boys and their father went to and the school’s rowing and football teams. But Alex loves water polo. However, his success in and love of water polo is not seen as important in the eyes his Dad or Ethan.

This is a story told in two intertwining parts, as Alex tries to piece together the events that lead to him lying in the Neurosurgery High Dependency Unit of Prince William Hospital. He knows everyone thinks he tried to commit suicide, as his whole world had fallen apart. But surely this can’t be true.

Mackie, the girl who he shares a hospital room with, is pivotal to his recovery, and has a huge impact on how he looks at life.

I felt so sorry for Alex as I read this story, that I just wanted to reach out and hug him. He is a great kid who seems to always get blamed for things that were not his fault. He just wanted to be listened to and respected, and these were two things that his father and older brother seemed incapable of doing.

The relationship that he had with his little sister Mia, who drowned, is extremely touching and, having a little girl the same age myself, I could not help the tears from flowing.

Many students, both boys and girls, may see themselves in Alex and, if they can take the positive out of this wonderful story, then this can only be a good thing.

Given the sensitive nature of this book, it is best suited to those 15+.